By Marina A. Moreno

“Have you met The Audibles?” That’s a question that should quickly be answered with a ‘yes.’ If you beg to differ and still believe you haven’t, think about this; Have you heard Justin Bieber’s “Hold Tight”, Young Money’s “Girl I Got You” or GRAMMY nominated Lupe Fiasco’s “Bitch Bad” – you’ve heard the work of The Audibles.

Made up of Dominic “DJ Mecca” Jordan and Jimmy “Jimmy G” Giannos, The Audibles first came together in 2007 on the set of Polow Da Don’s R&B group, I-15’s ‘Lost In Love’ video shoot in their hometown of Las Vegas, NV. Jimmy G expressed great interest in working with one of the group’s singer’s, Castro, whom DJ had grown up with. Their humble beginning started when they would perform together during lunch time or at talent shows at their local Mohave High School, DJ acting as beatbox to the dancing singers. After Jimmy met up with DJ to create, the two quickly established an understanding and appreciation for each other’s style and talents and wasted no time in creating the power production duo that we know today as, The Audibles. 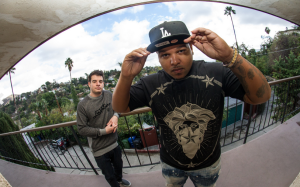 The duo’s first major production hit was their work behind Interscope artist, Mishon’s 2009 Billboard hit, “Turn It Up” which featured rapper Roscoe Dash. The song went on to climb the charts and led The Audibles to produce additional hits for Young Money including “We Are Young Money” and the previously mentioned “Girl I Got You.” The Audibles also gained partnership with Grammy award winning songwriter, Poo Bear, which led them to produce hits for Red Man and Method Man, and even gain much deserved respect for production on Lupe Fiasco’s L.A.S.E.R.S album. With an ecstatic combination of drums, keyboard, soft synths and live percussions, it only makes sense that The Audibles be granted with all they deserve.

Moving forward to 2011, The Audibles also became responsible for birthing the production behind four songs off rapper, Yelawolf’s debut album, “Radioactive” which included tracks co-produced by hip hop legend, Eminem. In 2012 the pair re-connected with Lupe Fiasco for his controversial, “Bitch Bad” and assisted on Poo Bear’s “BEATS 2 BREAK UP 2.”

Most recently added to their list of credentials working with artists’ such as Justin Bieber, 50 Cent, Tyga, Chris Brown, Lloyd, Wiz Khalifa, French Montana, Kendrick Lamar, R. Kelly and even Snoop Dogg. The pair is currently gearing up for the release of former I-15 member, Castro’s debut solo album, “You Fetish” in which they produced the entire album along side Castro and Poo Bear’s lyrical creativity.

Be sure to follow The Audibles on Twitter, Instagram, Soundcloud and even Facebook to stay updated on all they have coming to your ears including Castro’s “You Fetish” which drops early 2015. Trust me when I say, that’s one album you don’t want to miss out on, one of the best we’ve heard in awhile from start to finish. #noexaggeration 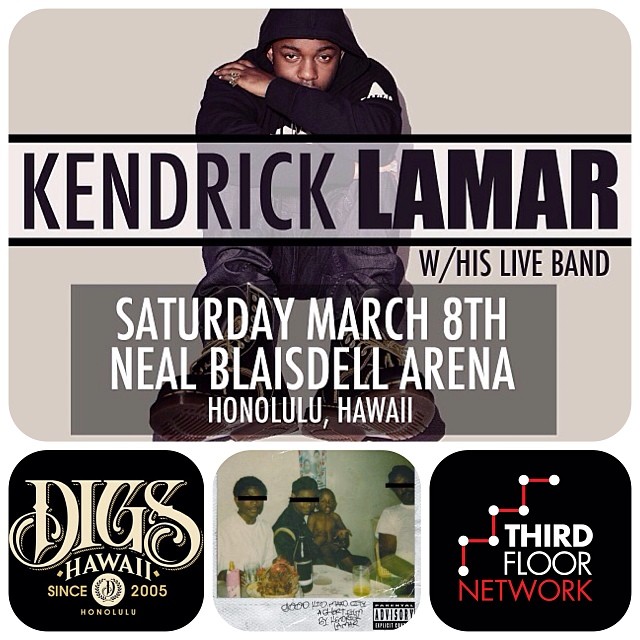 We all know he deserved at least one Grammy last night, but the positive spirit of this young rapper and his amazing team behind him will lead him to many more successes soon to come.

Even at this first livestreamed performance of “Hiii Power” we sensed a global star was born. Kudos to the #TDE team for an amazing year. Can’t wait to see what the sophomore album has in store for us.

Important quotes from this interview:

“Keep pushing, keep doing the music you are doing and never let anyone nobody ruin your creative space.”

and from the song:

“And everything on TV just a figment of imagination”

Keep putting your three fingers in they sky… #ThreesUp

p.s. Ever wondered who is someone #Kendrick has always wanted to meet? Find out here.

by @chrissyteigen “one can only be so lucky to get a nph photobomb” via @PhotoRepost_app – 2 of my faves in one #grammys pic… “legen… Wait for it… Dairy!” I heart #neilpatrickharris #howimetyourmother @chryscruz

In honor of Grammy week beginning in LA, flashing back to when #JustinBieber serenaded us with #SoSick by Neyo LIVE on the red carpet on CBS.

JT x Jay Z Round 3 + Timbaland. In my #suitandtie w/ brother from another mother @criscokidd in his DJ Bruce Lee Tee at @justintimberlake post #grammys concert. #jayz out on a school night… 😉 (at Palladium – Hollywood, CA)

Cheers to @miguelunlimited for making your voice the center of your #grammys performance. That’s all you needed #Adorn was my favorite song of the year since you premiered it at your @myspace presents show. 🙂 #suitandtie #miguel #wizkhalifa

Cheers to @miguelunlimited for making your voice the center of your #grammys performance. Congrats! #adorn was my favorite song of the year 🙂 #miguel #wizkhalifa #suitandtie

Pulled out my mini #suitandtie for the special occasion. #justintimberlake #grammys See you there? (at Palladium – Hollywood, CA)

@NCISHawaiiCBS starring @vanessalachey 🇵🇭 as Jane Tennant, a pinay Special Agent in Charge of NCIS Pearl Harbor starts Monday 9/20. 🤙🏽She is the first woman in the NCIS franchise to lead a team in investigating high-stakes crime involving military personnel & national security. The show aka “the world’s most successful TV series,” airs at 10/9c on @CBStv weekly.
@MYXglobal daily @MYXnews & weekly TV show spotlights young creatives & serves up inspiring content for the next generation from around the world. New episodes air every Saturday & bookmark our website www.myx.global for daily updates.
@hypland founder @jordanbentley turned his T-shirt selling business that he started at 13 yrs old into a multi-million dollar clothing company. @sweetlifeonmax created by @issarae shares his story on their reality show called "Sweet Life: LA." S1 just ended but you can binge & watch the "Group Chat" reuniting the cast today on @HBOMAX. The show is inspiring for the youth to continue to pursue their passions with a group of supportive friends while also traveling the world. The music like #Insecure is 🔥, & the opening song was created by @blxst, who performs on the finale with @goodmorninggabe 🇵🇭. LMK thoughts if you watched it too. 👇🏽
@inigopascual joins lead cast of FOX TV drama @MonarchonFOX with Oscar winning @susansarandon, country star @traceadkins & more. The new show will debut 1/30 after the 🏈 NFC championship game & second episode on 2/1 as announced in @variety & @deadline. “This is a huge step not only for Inigo, but for Fox as they make a significant impact in diversifying the cast with a Filipino actor as one of the leads, and an inspiration to others as they look to crossover into Hollywood.”🎥👉🏽, catch up on his @MYXglobal digital series, #TheCrossover & get more details: www.myx.global/inigopascual-monarch.
The World's Most Amazing Vacation Rentals S2 on @netflix: Luxury, unique or budget-friendly travelers get tips from 3 fun travelers (@meganbatoon 🇵🇭, @jo_franco & @luisdortiz as they visit vacation rentals around the globe and share their expert secrets & tricks in this reality series. 8 new episodes featuring Bahamas, Anquilla, Finland, Joshua Tree, New York & more. To learn more, visit: www.myx.global/amazingvacationrentals-season2 on @MYXglobal & @MYXnews. I love this inspiring show and you will too! 🌎
@mtv @vmas 🇵🇭 win big & stun on the red carpet: @oliviarodrigo, @brunomars, @bretmanrock, @bellapoarch, @saweetie & more. See photos & full list of winners including Olivia’s 6 nominations with 3 big wins for Best Song, Best New Artist & Push Artist of the Year, Bruno & @silksonic for Best R&B & more: www.myx.global/MTVVMAS-2021 on @MYXglobal. 🎥🏆🎶 @MYXnews