Starting February 4, Saturday, tfc_U Talks — a series of informative and interactive discourses and discussions organized by ABS-CBN International’s TFC that is designed to connect, inspire and empower Filipino American college students –- is kicking off its year-long, monthly series with a talk called, “Breaking the Mold” that will be held at the Beach Auditorium of Cal State University, Long Beach.  Admission to the event is free.

“We started the year with the topic of ‘Breaking the Mold’ because that’s exactly what we want to achieve with our university talk series,” said Troy Espera, tfc_U Talks team lead and executive producer of BA, a daily Filipino American TV news show shown on TFC. “We live in an age and culture where personal ethnic identity, racism, media-imposed pressure and social stereotypes all conspire to turn us into something that we are not.”

Espera continues: “’Why not conform,’ they’ll say.  ‘The mold is there for a reason.’  Well, guess what: Your mold doesn’t work for everyone. We hope that tfc_U Talks provides a safe, non-judgmental, innovative, relevant and positive hub of ideas plus people-to-people connections to college students that could change the way they are perceived, the way they do things and the way they pursue their lives that make a difference in society.”

The FilAm speakers for tfc_U Talks’ “Breaking the Mold”, February 4, at the Beach Auditorium of Cal State University, Long Beach 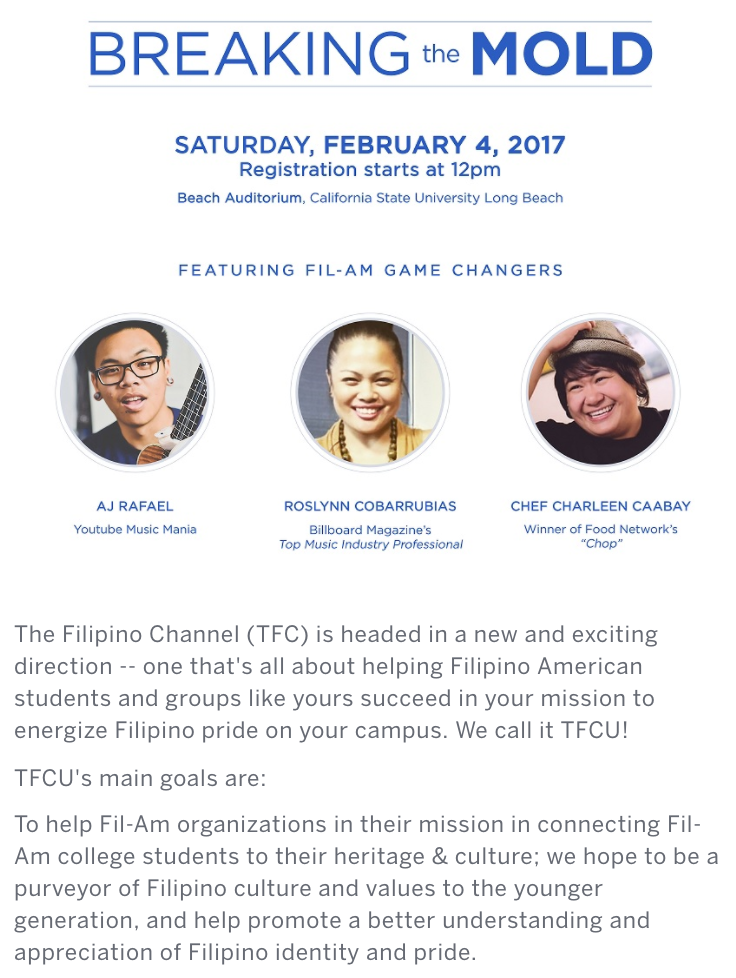 For February 4, the tfc_U Talks team selected three Filipino American speakers who dared to do the unexpected in their respective fields, and thus stood out and made an impact.

AJ Rafael – A native of Moreno Valley, California, AJ is a singer-musician-songwriter-recording artist who is among the millions who have tried their luck in “American Idol”.  But while he had a good audition in 2005, he never progressed to the later stages in the competition.  A year later, he started posting his videos on YouTube.  To date, his videos have been viewed over 100 million times. He now has over 650,000 subscribers on the platform, over 400,000 followers on Facebook, over 183,000 followers on Twitter, over 147,000 followers on Instagram and is also blowing up Snapchat with his clips, making him a social media powerhouse.  He has also released original songs, EPs and one full album that was funded on Kickstarter. AJ has toured internationally.

Roslynn Cobarrubias – With about two decades of experience in the music industry and social media arena, Roslynn’s resume is highly impressive. She is the co-Founder & CMO of mydiveo.com, a global talent discovery & video resume platform that cultivates discovery and collaboration by providing artists and creatives with a mobile portfolio to showcase their talent. Last year, engage:BDR, a leading cross-device advertising solution company, announced its acquisition of mydiveo for US $7.4 million. Roslynn was also Senior Director of Artist Relations at Myspace Inc., a company she helped market since its early stages and helped develop for close to 10 years. Billboard Magazine named her one of the “Top 30 Music Industry Professionals Under 30″ alongside professionals Scooter Braun (Justin Bieber’s manager) and Daniel Ek (Founder of Spotify). Roslynn was also featured in The Source Magazine “Power 30″ alongside notables Diddy & Russell Simmons with the Myspace co-founders. She has produced over 500 live events & editorial programs with artists and brands like Jay-Z, Rihanna, Bruno Mars, Drake, Miguel, AT&T and Wendy’s. She is the current TV host/producer of ‘mydiveo LIVE,’ a music magazine show on cable network MyxTV, available in over 15M+ homes (DirecTV, Time Warner Cable, Comcast, Sony Roku, etc.)

Chef Charleen Caabay – Setting up a makeshift kitchen wherever she could, Chef Charleen started her colorful culinary adventures by opening her first pop-up restaurant in October 2012, building a solid following of foodies throughout the Bay Area and beyond. Shortly after, her Kainbigan Filipino Comfort Food, opened its doors in August 2013 in Oakland, California. She has been instrumental in introducing Filipino cuisine to companies such as Google, Zoosk, OkCupid and Eventbrite, to name a few. Chef Charleen also catered to such celebrities as Goapele, rapper Eve and famed poet Ursula Rucker.  In December 2016, Chef Charleen became the first Filipino American female chef to win in Food Network’s “Chopped” cooking show. She plans to travel to the Philippines with family in early 2017 to explore and get inspiration for her upcoming culinary programs and special event projects featuring Filipino cuisine. This will be launched this Spring and Summer upon her return to the San Francisco Bay Area.

To join the February 4 event, register online now at http://bit.ly/TFCUtalk2 . To receive updates on the other legs of the tfc_U Talks 2017 tour, visit https://www.facebook.com/TFCUniversity/.

I was recently asked about my experience growing up in Walnut was and thought I’d share it below.

1. How did Walnut High change or impact you?

Going to Walnut High School and living in Walnut were some of the best years I’ve had in my life that later prepared me for not only my career, but in traveling & my day to day relationships. Because our city, school and faculty are so diverse I’m able to interact & bond with various groups of people easily. Practically every celebrity or artist I meet I tell them how great Walnut is or mention that I’m still best friends with the same folks I hung out with at SUZANNE & WHS. We even have our own social media hashtag #WalnutGirls & workout group #WalnutGirlWarriors close to 20 years later. 🙂  I thought it was normal to be close to your friends from high school, but as I travel the globe & meet new people, I realized how unique our experience there is and people really admire our bonds we created in school are closer than ever. A lot of people don’t have that or stay in touch with their HS friends like we do where we still regularly get together and spend holidays or major life events together. 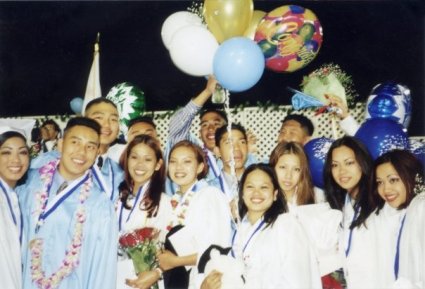 Career wise, in WHS ASB under Mr. Farren, I used to play the music from the big speakers at lunchtime or at school dances for my sister, WHS President Chrystal Cruz’ 2002 class, while also handing out recorded songs to classmates on cassette tapes, which led me to pursuing DJing, starting my first college Third Floor Radio show at Mt. Sac and beginning my professional music career. I interviewed artists I always admired like A Tribe Called Quest, Dwele, The Pharcyde, Jurassic 5, Mos Def, Talib Kweli & many more from a tiny studio in Walnut. Back then it was just a passion of mine, but Walnut helped me learn that if I could do what I loved locally and for friends, than I could do it on a larger scale outside of our city but always repping our city. On my first TV interview on BET I wore a WHS “Must Have Stang Pride” shirt because I am so proud of our HS!

2. Any accomplishments from high school that you remember of?

Asides being the DJ at lunch, that was a huge accomplishment and I think the reason I even ran for ASB. 😉 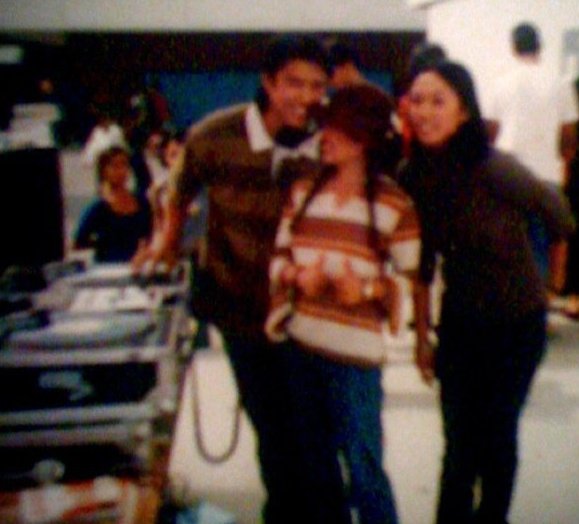 -1998 ASB Speaker of the House and making the Hoofprint Newspaper cover when I dressed up as Superwoman with our VP Thivantha just so that we could win our final and last pep rally as Seniors because we lost everyone of them prior to the younger classes. 🙂 (picture attached) 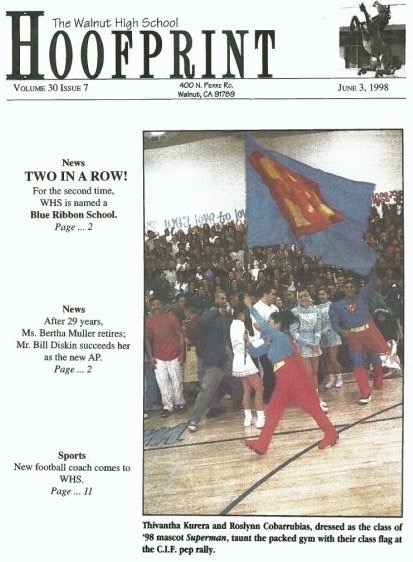 -Co-Founder/Chief Marketing Officer of mydiveo, a global talent discovery platform that has helped in talent booking for America’s Got Talent, the White House AAPI and many more brands/events that was recently acquired by Engage:BDR for $7.4 Million dollars.

-5 White House visits under the Obama administration, helping book musical talent for the White House AAPI & recently getting to bring my Mom, Eve with me

-The Source Magazine Power 30 cover feature with Diddy/Russell Simmons with the Co-Founders of MySpace.com. 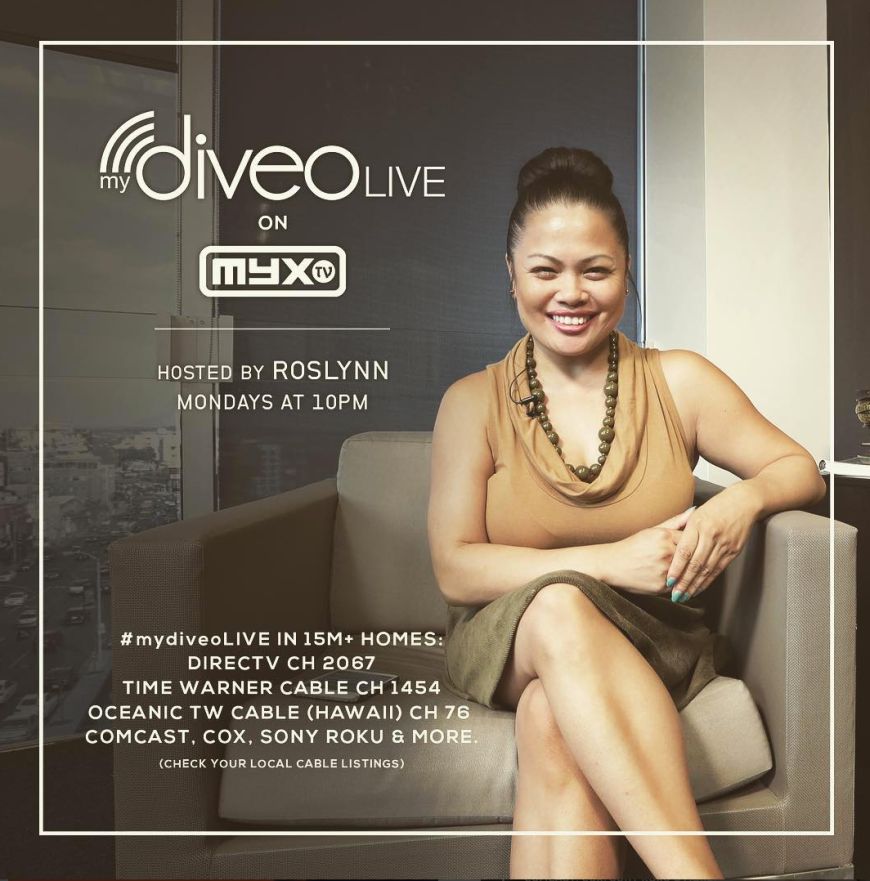 Aside from being a MyxTV host/producer & mydiveo Co-Founder, I’ve produced over 500 live concerts/events & editorial programs with artists and brands like Justin Timberlake, JayZ, Rihanna, Bruno Mars, Justin Bieber, Drake, Kendrick Lamar, John Legend, Anderson .Paak, Miguel, AT&T & Wendy’s. I’ve previously helped launch MySpace.com & MySpace Music and spent a decade there as the Head of Artist Relations, while it was the first global social network and #1 website in the world, traveling the globe to help launch other countries like London, UK and Mexico City, MX. I love to speak at various music conferences & colleges across the globe like SXSW, Urban Network, New Skool Rules, UCLA and the LA Film School to hopefully inspire others to pursue their creative passions & utilize social media to further their careers. In my spare time I still love DJing, putting together fun filmed group workouts & working on our inspirational youth clothing line, Little B-Girl Clothing launching soon!