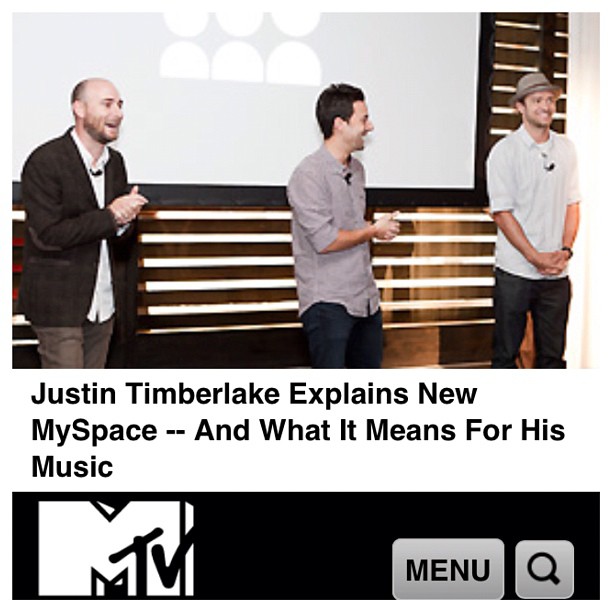 Justin Timberlake Explains New MySpace — And What It Means For His Music
Singer/actor tells MTV News that the social-networking site’s reinvention is ‘blurring the gap’ between artists and fans.

When it was announced that Justin Timberlake bought a stake in MySpace more than a year ago, we didn’t quite know what to think about it. Sure, we’ve been used to Timberlake flexing various creative muscles via film, TV, fashion, restaurants and even home décor, but his taking part in the revamping of a seemingly flat-lined social-networking site was a real head-scratcher.

And even though we got a brief glimpse of the new MySpace back in September, we haven’t really been able to get in Timberlake’s head about the subject — until Thursday, when he let a select group of reporters in on a full demo of the redesigned site to talk about why he took on this challenging project in the first place, what excites him most about connecting artists with other artists, and artists to their fans, and, perhaps most intriguing of all, what all this means for Justin Timberlake the musician.

The “Top Fans” section of artist pages displays a musician’s most influential and connected followers, and Timberlake said he wants MySpace to help create a more engaging experience that isn’t about trying to measure support in numbers or restricted by word count.

“I can’t speak for every artist, but I can tell you that if I have X amount of followers on Twitter, I’d rather that number be smaller and know that they’re all engaging versus throwing comments all over the place that have nothing to do with anything,” he said. “Lucky for me, from what I’ve seen, it’s that type of interaction [with the ‘Top Fans’ feature].”

In having conversations with fellow artists both signed, unsigned, famous and unknown, Timberlake said the one thing everyone wanted to do was find out more about what makes their fans tick and why they respond to certain material.

So how exactly does Timberlake plan to use his own artist page?

“I’m going to reserve a little bit of my answer, because I don’t know yet, and I think that it could change from statement to statement, experience to experience,” he said, adding that he hopes to use it for inspiration and to make statements about specific pieces of art, whether it be music, photography, film, etc.

“I don’t want MySpace to be who I was last night through a bunch of drunken pictures in a drunken stupor, and I don’t want it to be who I am right now on what I’m typing on the Internet,” Timberlake said about his vision for his personal pages, clearly alluding to MySpace’s biggest competition, Facebook. “I want it to constantly be about who I’m going to be, what I have to offer the next day and the next day.”

At this point in our relatively candid conversation with Timberlake and his partners Tim and Chris Vanderhook, we couldn’t help but feel that all this talk about being musical and finding inspiration from other artists might be a sign that the “Sexy Back” singer wants to make some music of his own.

“You’re the ones who stopped talking about me as a musician. You guys act like I said I’ve retired,” Timberlake joked about the media having pre-emptively put him out of business. “I can tell you this: When I’m ready to say something, you always know that I’ll say it in the biggest way possible.

“[My music] really comes from the heart,” he added. “Making movies and making music, they have a lot of similarities, but I can tell you that, and while they both come from honest places, music for me is the thing that comes most naturally to me, and for me, I just don’t take it for granted.”

Timberlake all but promised us that when he has something to say musically, he’ll say it.

“I’m not dumb. I hear what people say,” he said. “It obviously doesn’t bother me. I’m really patient. It’s not about them. [My music] comes from a pure place. If anything, I’m honoring it in the best way that I know how, but when it’s time, I’ll be ready. I’m not less inspired, I didn’t give up, but until I have something to say, I was taught to keep my mouth shut. That’s how my mother raised me.”

Founded by Roslynn Alba Cobarrubias, 1587 is one of the dopest, global marketing agencies - with a passion in helping exponentially grow exposure for Filipino, Islander & Native Hawaiian producing talent, content and events. View all posts by 1587