By Marina A. Moreno

We can only imagine how many heads shook up and down saying “yes” as they read the title above. How could you not know Quincy? Although many reference him when speaking of his music, fashion and media mogul parents and previous “My Stunna 16” MTV special, Quincy should never be mistaken for ‘living in their shadows’. 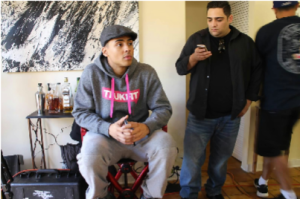 At just 23-years young, Quincy Brown is a mini-mogul himself. With titles such as producer, photographer, director, singer, model, actor, philanthropist and co-founder of his own production company, FourXample Productions, Quincy continues to evolve into an unstoppable force by pursuing each and every passion and aiming for nothing less than success at the finish line. In the years leading up to his prime, Quincy is already acting in feature films produced by praised music superstar producer, Pharrell and Oscar award winning actor Forrest Whitaker, worked along side world-renowned actors such as Lawrence Fishbourne and new generation “It” girls like Keke Palmer all while still managing to be the face of global brands as a model.

Being that Quincy stems from one of music’s smartest businessmen, Sean “Diddy” Combs and is one of the main reasons the world grew to know, love and respect the legendary Notorious B.I.G, it’s only fitting that the apple doesn’t fall far from the tree when it comes to musical talent. One of his favorite memories begins with being a young kid in the studio with Biggie, not knowing at the time he was witnessing history.

In 2012 Quincy released his debut single, “Stay Awhile” which featured singer, Kendre, and had a visual that starred model, Jasmine Sanders as his lead girl. The song was not only smooth enough to gain major blog and magazine site recognition from sites such as VIBE, ThisIsRnB, RyanSeacrest.com, and Rap-Up, but it also climbed the Top 10 Countdown on BET’s 106 and Park and remained on the show’s countdown for a number of weeks. Quincy followed up his 2012 hit with his 2013 single, “The First Thing” which was produced by Daniel Ware and written by both Daniel and Quincy. Collectively, both videos ranked in over a million streams on YouTube adding up to Quincy’s rabid large social following reaching over 2million+ followers and dozens of dedicated fan pages.

Moving into 2014, Quincy has kicked into gear his philanthropist role by coordinating the First Annual Celebrity Kickball Charity Event and the First Annual Celebrity Flag Football Charity Event with singer Chris Brown which brought together talents such as Floyd Mayweather, Kendall and Kylie Jenner, Ne-Yo, DJ Khaled, Trey Songz, Paris Hilton, Bow Wow, Tyga, Omarion, Amber Rose, Terrell Owens, Nelly, The Game, and many more to raise money for Chris’ Symphonic Love, which supports and creates art programs for the youth, and Quincy’s charity of choice, Best Buddies, which is dedicated to creating opportunities of employment and leadership development for people with intellectual and developmental disabilities. Quincy has done a magnificent job at highlighting what’s important when reaching the plateau that someone of his nature has by giving back to those who may not have the luxury.

Today Quincy is both behind and in front of the camera with his FourXample Production crew, recently wrapping up his directorial debut of pop-singer and MRok Music Group signee, Elle Winter’s latest video, “No Words” which features his brother Christian Combs and song produced by GRAMMY award winning duo, the Midi Mafia. Quincy is also signed to MRok Music Group and is preparing to unveil both the audio and official video for his new single, “Friends First” which features Bad Boy recording artist/rapper and international star, French Montana. His new album is slated for a 2015 release which also features G-Eazy and more.

Follow Quincy on his various social media accounts (@Quincy) as he plots, plans and executes each and every project.

His new single, lyric and music video for “Friends First” featuring French Montana will be premiering next year and could be found on www.youtube.com/thisisquincy – subscribe to be one of the first to know when it releases.

What residents once knew as Ferguson, Missouri, is now becoming a war zone as protestors fight for justice for 18-year old Michael Brown who was unarmed yet gunned down by an officer a week ago after suspicion of robbery from a nearby market.

What is being deemed as a result of racism has caused the streets of the St. Louis suburbs to become a state of emergency as countless officers try and defend themselves against protestors who are simply just asking for answers; Why are we killing each other? Why is racism still alive? Why is the power of authority being abused? Why another innocent teenager?

As the world keeps a close eye on their televisions, newspapers and news feeds, entertainers and musicians of just about every genre have come to the light searching for the same answers and most of all, asking our communities, how can we prevent this from happening? How can we all change ourselves and generations to come for the better so that we don’t keep killing each other? Black, white, blue or purple. Big, small, round, or tall. How can we raise awareness and gain justice?

While attending a charity flag football event held by R&B singers Chris Brown and Quincy at Occidental College in Los Angeles, California, St. Louis rapper/native Nelly was sure to utilize the moment, grab not just the microphone, but rather the undivided attention of the audience to let them know, we need to educate ourselves. He said if anyone could understand the injustice which was going on in Ferguson are the people of LA.

As he spoke, just about everyone in attendance; fans and celebs; raised both hands in the air and in sync shouted, “DON’T SHOOT”. An obvious hurt and concerned Nelly took to fans to not “preach”, but instead speak knowledge on what’s been going on in his hometown and what’s unfortunately, an issue spreading from city to city.

I was fortunate enough to take a walk with Nelly for an exclusive interview off the field, he discussed what do we have to do to make things better in his home town… Education and not aggression should be the strategy to help future generations.

Watch below to hear his thoughts below. We hope that more celebrities and artists use their voice to influence awareness and change as he did. To view more highlights watch the SKEETV wrap up here.

Actor/Singer Quincy hosted a charity flag football game with superstar artist Chris Brown today at Occidental College in LA. Quincy and Chris each put together a star studded celebrity squad to battle it out on the turf all for an amazing cause – Team Quincy vs. Team Breezy. A portion of the proceeds will go to Chris’ charity “Symphonic Love”! To show support Trey Songz, The Game, Kendall Jenner, Tyga, Wale, Karrueche, Jermaine Dupri, Eric Bellinger, Bow Wow (aka Shad Moss) and many more were on the field either in the game or cheering on the sidelines. 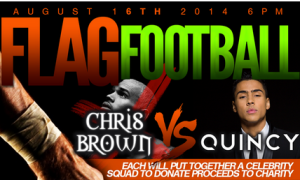 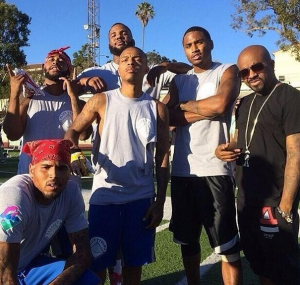 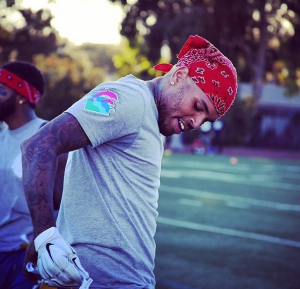 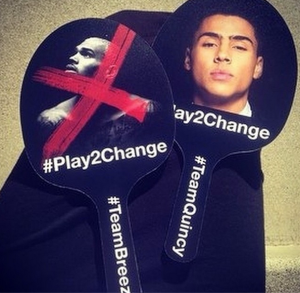 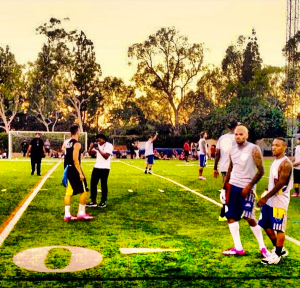 Each will put together a celebrity squad to donate proceeds to charity.

Check out footage below of their last celebrity kickball game and see why you can’t miss out on the next event! Tickets on sale at www.planetquincy.com/flagfootball 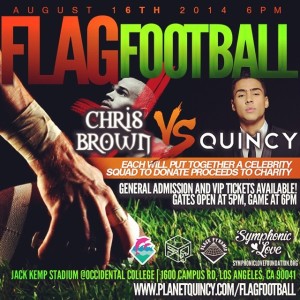 SKEE.TV had the exclusive coverage of Chris Brown and Quincy’s celebrity charity kickball event, where everyone you could think of came out to support from Lil Wayne, Floyd Mayweather, Amber Rose, Paris Hilton and many more. Watch our recap video to see what went down as our host, Jen DeLeon talks to the players throughout the game.

Can’t wait for the next event that raised alot of money for both Quincy’s charity of choice “Best Buddies” and Chris Brown’s “Symphonic Love.” 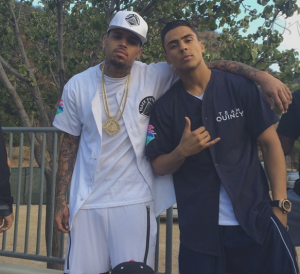 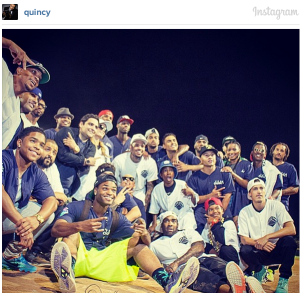 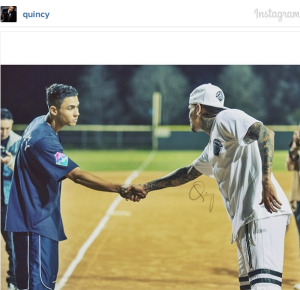 (featuring songs by, written or co-written by Eric)

-Usher “What Happened To You”

EB discusses his humble beginnings growing up wanting to be the next Deion Sanders playing football in Compton, CA to evolving into his current career as a songwriter and performer. He discusses writing for artists like Chris Brown, Justin Bieber and Usher alongside mentions his favorite song from his catalogue to date:

(ft. EB’s favorite song & additional he co-wrote for others)

-Sevyn Streeter “Sex on the Ceiling”

Eric discusses the true story that inspired the creation of “I Don’t Want Her” at a James Hardin yacht party before performing it live, after he speaks on Jermaine Dupri adding a verse to the remix soon. (JD produced the original Kriss Kross “Jump” song that League of Starz producer SorryJayNari sampled to create the beat for “I Don’t Want Her.”

Eric Bellinger ends the show with a special acapella version of the song, “Fine China” that he wrote for Chris Brown.

& on the SKEE247 mobile streaming APP

Watch a video clip of the interview below as well: 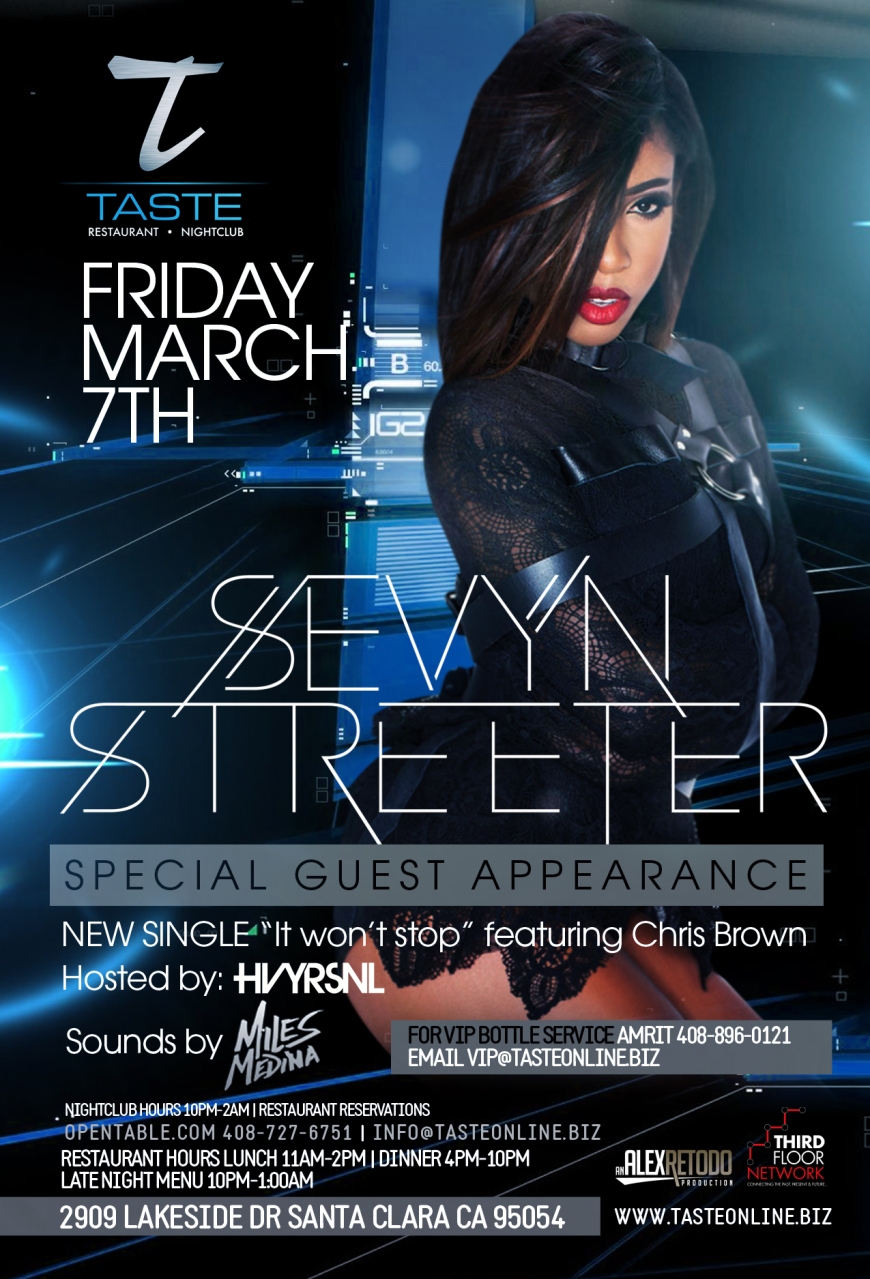 If you love the #SevynStreeter #ChrisBrown “It Won’t Stop” song below as much as I do, you need to see her perform LIVE at #TasteNightclub in Santa Clara this Friday presented by the Third Floor Network & Alex Retodo Productions. Details on the poster above.

@NCISHawaiiCBS starring @vanessalachey 🇵🇭 as Jane Tennant, a pinay Special Agent in Charge of NCIS Pearl Harbor starts Monday 9/20. 🤙🏽She is the first woman in the NCIS franchise to lead a team in investigating high-stakes crime involving military personnel & national security. The show aka “the world’s most successful TV series,” airs at 10/9c on @CBStv weekly.
@MYXglobal daily @MYXnews & weekly TV show spotlights young creatives & serves up inspiring content for the next generation from around the world. New episodes air every Saturday & bookmark our website www.myx.global for daily updates.
@hypland founder @jordanbentley turned his T-shirt selling business that he started at 13 yrs old into a multi-million dollar clothing company. @sweetlifeonmax created by @issarae shares his story on their reality show called "Sweet Life: LA." S1 just ended but you can binge & watch the "Group Chat" reuniting the cast today on @HBOMAX. The show is inspiring for the youth to continue to pursue their passions with a group of supportive friends while also traveling the world. The music like #Insecure is 🔥, & the opening song was created by @blxst, who performs on the finale with @goodmorninggabe 🇵🇭. LMK thoughts if you watched it too. 👇🏽
@inigopascual joins lead cast of FOX TV drama @MonarchonFOX with Oscar winning @susansarandon, country star @traceadkins & more. The new show will debut 1/30 after the 🏈 NFC championship game & second episode on 2/1 as announced in @variety & @deadline. “This is a huge step not only for Inigo, but for Fox as they make a significant impact in diversifying the cast with a Filipino actor as one of the leads, and an inspiration to others as they look to crossover into Hollywood.”🎥👉🏽, catch up on his @MYXglobal digital series, #TheCrossover & get more details: www.myx.global/inigopascual-monarch.
The World's Most Amazing Vacation Rentals S2 on @netflix: Luxury, unique or budget-friendly travelers get tips from 3 fun travelers (@meganbatoon 🇵🇭, @jo_franco & @luisdortiz as they visit vacation rentals around the globe and share their expert secrets & tricks in this reality series. 8 new episodes featuring Bahamas, Anquilla, Finland, Joshua Tree, New York & more. To learn more, visit: www.myx.global/amazingvacationrentals-season2 on @MYXglobal & @MYXnews. I love this inspiring show and you will too! 🌎
@mtv @vmas 🇵🇭 win big & stun on the red carpet: @oliviarodrigo, @brunomars, @bretmanrock, @bellapoarch, @saweetie & more. See photos & full list of winners including Olivia’s 6 nominations with 3 big wins for Best Song, Best New Artist & Push Artist of the Year, Bruno & @silksonic for Best R&B & more: www.myx.global/MTVVMAS-2021 on @MYXglobal. 🎥🏆🎶 @MYXnews