“Pete Frates can no longer speak. But in the last two and a half weeks, a video posted on Facebook by Mr. Frates, a 29-year-old former college baseball player, has inspired people like Bill Gates, LeBron James, Chris Christie and Taylor Swift to dump a bucket of ice on their heads and speak out for his cause.

The “Ice Bucket Challenge” has lit social media on fire, raising both money and awareness for amyotrophic lateral sclerosis, commonly known as Lou Gehrig’s disease. About 30,000 Americans now have the disease, which attacks nerve cells and ultimately leads to total paralysis, though the mind remains sharp. Life expectancy is typically two to five years from the time of diagnosis.

The stunt goes like this: People make a video of themselves dumping a bucket of ice water on their heads, post it on Facebook, Instagram or other social media sites, and then challenge friends to do the same within 24 hours or donate $100 to ALS. (Many do both.)

People have shared more than 1.2 million videos on Facebook between June 1 and Aug. 13 and mentioned the phenomenon more than 2.2 million times on Twitter since July 29, according to those sites. Donations to the ALS Association have spiked. As of Sunday, the association said it had received $13.3 million in donations since July 29, compared with $1.7 million during the same period last year. It said there were about 260,000 new donors. (With a spate of celebrities and business executives joining in over the past few days and pledging contributions, that number is expected to rise.)”

Watch it here.Visit the ALS website to make your donation, 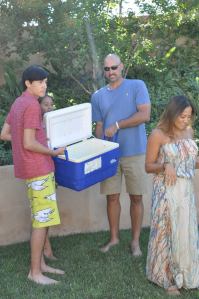 Lived my dream of being a mascot last night at the @laclippers game with @chuckthecondor, living vicariously through his segments. Fun but sad fact: At #WalnutHighSchool I tried out to be the mustang 🐴 mascot, but they told me I was too small for the costume and there wasn’t budget to make another. Thought it would be such a fun job getting to make people dance & cheer while no one knowing who you are. 🥲😅 #LAClippers
Such an exciting game! @laclippers you did it, you made history! ❤️💙 #PlayoffsOurWay
“I gotta feeling, that tonight’s gonna be a good night...” (I hope 😅). @laclippers in 6 would make history for their first Western Conference Finals today! 🤗 First time back in a full capacity arena 😷, but excited for the game, getting to see @jordanclarksons of @utahjazz play again too. 🏀
@lianev 🔥”Girl so bad call 📞 911! ⚠️ Danger by @commonkings x @inigopascual x @djflict. 🎶 Create your own duets or #dangerdancechallenge videos on TikTok & IG. ❤️ #playwithdanger www.myx.global/danger
@laclippers in 6? Hoping for a win today so we can see them win the series at home Friday. 🤗 P.S. look for @dcasados sitting courtside during home games behind the table, patiently handling business on his Janet Jackson microphone.❤️🏀 #LAClippers
@chefvallerie & her fan club.❤️🤙🏽 @yamashirola